I recently made a small update to Rtf2Html (the converter I wrote for converting RTF text to HTML markup):

Download it here.
Note that this version requires the .NET Framework v4.0 or later. 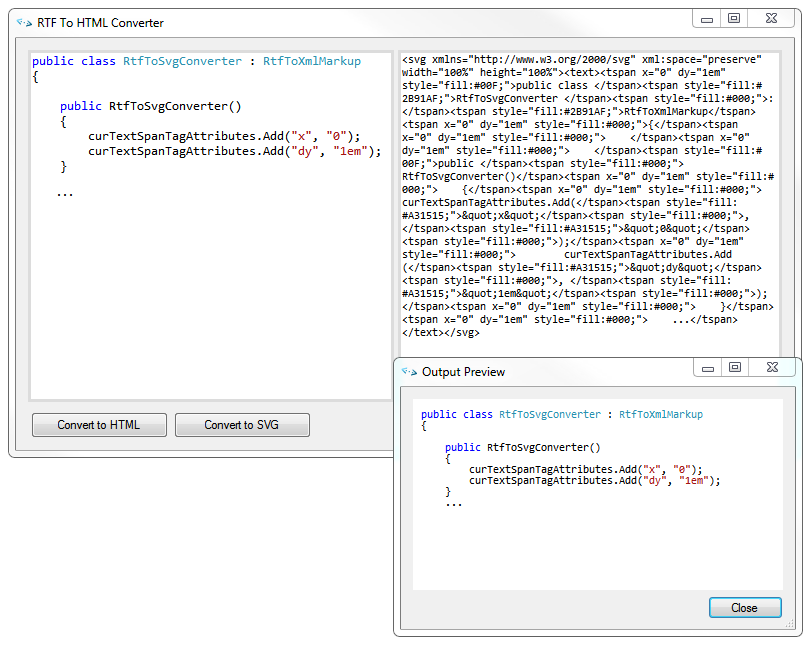 While you can put the generated SVG text on a page, that wasn’t really my motivation here; what I wanted was a way to import syntax-highlighted text (in my case, typically code) into a vector graphics application (Inkscape, Illustrator, etc.) to be placed as part of a diagram.

The app was designed around the goal of being able to quickly copy and paste snippets of code from Visual Studio (or Netbeans) and turning it into HTML that I could embed in these blog posts; this update stays true to that, and that’s why this app is still so sparse on features, such as conversion of font size or paragraph alignment attributes.

The block indentation removal that now occurs after text is pasted in may be a bit slow. Text in the RichTextBox is selected and altered within the text box itself (it’ll also freeze the UI – if you understand multithreading and WinForms, you know why it’s not simply a matter of spawning off a thread). The alternative is to deal with an RTF parser and edit the RTF input directly, but that’s way more work than I’d care to devote to this app at the moment.