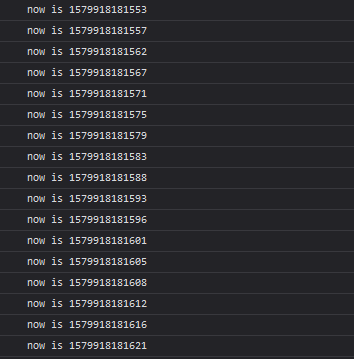 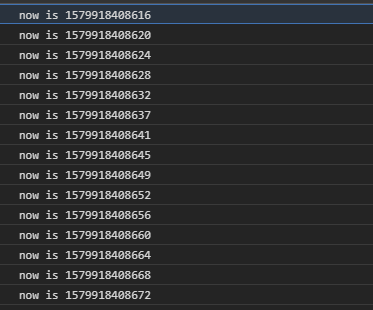 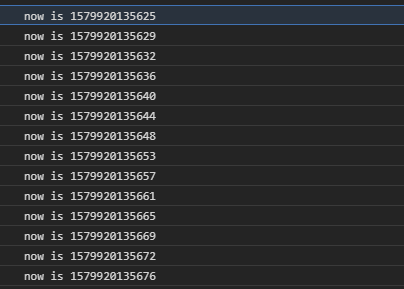 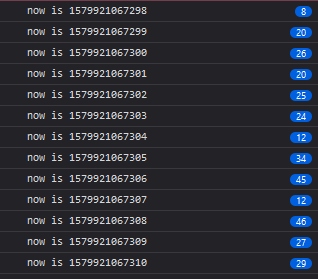 Web workers handle incoming request messages via a function declared on the onmessage property of the worker. A, perhaps not so obvious, behavior here is that incoming requests are queued. If you’re doing something intensive within the worker (or the CPU is taxed b/c of other processes) the queuing behavior becomes more obvious, as you need to wait longer for a response from the worker due to the fact that previous requests need to be picked up and handled first. Here’s a simple worker that does some heavy lifting (at least for Chrome 79 on an i7-4790K):

… and here’s what happens after making 12 requests to it in a loop:

I can’t say that this is a bad thing, this is generally sensible and what you’d expect to happen. That said, there are workloads where you may want to prioritize things differently. GraphPaper was one such case for me. Workers are handling things based on user interactions, the last request represents the current state of the world and is typically the only request that matters (any others from before can be thrown away). Unfortunately, this is no mechanism to interact with or re-prioritize messages in this underlying queue. However, you can offload the requests to a queue that the worker manages internally by itself. The onmessage() function simply puts the request data in a queue and we can use setInterval() to continuously call a function that pulls and processes requests from this queue. Here’s what the modified worker code looks like, where the latest request is prioritized (and previous ones are thrown away):

… and here’s what happens after making 12 requests to it in a loop:

(sometimes, there are also cases where only request 12 was processed)

So this works pretty well, but there there are a few things to be aware of. The time it takes to post a message to the worker, is somewhere between 0ms – 1ms, plus the cost of copying any data that needs to be transferred to the worker. (The code was updated to explicitly specify a 4ms delay, setInterval with a 0ms delay isn’t a good idea). What this means in practice is that there is additional latency before we begin processing a request, but compared to a scenario where we have to factor in waiting on all prior requests to finish processing (which is the point of doing this to begin with), I expect this method to win out in performance.

Finally, here’s a look at a GraphPaper stress test and how prioritizing the last request to the connector routing worker (which is responsible for generating the path between the 2 nodes) allows for a faster/less-laggy update:

Passing a URL to the Javascript file:

Or, creating a URL with the Javascript code (as a string). This is done by creating a Blob from the string and passing the Blob to URL.createObjectURL:

With GraphPaper, I’ve used the former approach for the longest while, depending on the caller to construct and inject the worker into GraphPaper.Canvas:

This technically works but, in practice, there’s 2 issues here:

So, I worked to figure out how to construct the worker within GraphPaper.Canvas using URL.createObjectURL(), and this is where things got trickier. The GraphPaper codebase is ES6 and uses ES6 modules, I use rollup with babel to produce distribution files the primary ones being minified IIFE bundles (IIFE because browser support for ES6 modules is still very much lacking). One of these bundles is the code for the worker (dist/connector-routing-worker.js), which I’d need to:

The latter steps are straightforward function calls, but the first is not clear cut.

After producing the “distribution” code for the worker, what I needed was to encapsulate it into a string like this (the “worker-string-wrap”):

Writing that out to a file, I could then easily import it as just another ES6 module (and use the string to create a URL for the worker), then build and produce the distribution file for GraphPaper.

I first tried doing this with a nodejs script, but creating a rollup plugin proved a more elegant solution. Rollup plugins are aren’t too difficult to create but I did find the documentation a bit convoluted. Simply, rollup will execute certain functions (hooks) at appropriate points during the build process. The hook needed in this scenario is writeBundle, which can be used to get the code of the produced bundle and do something with it (in this case, write it out to a file).

The plugin is setup within a rollup config file:

Note that addtional config blocks for components that use ConnectorRoutingWorker.string.js (e.g. the GraphPaper distribution files), need to be placed after the block shown above.

The worker can now be created within the codebase as follows:

Looking ahead, I don’t really see a good solution here. Better support for ES6 modules in the browser would be a step in the right direction, but what is really needed is a way to declare a web worker as a module and the ability to import and construct a Worker with that module.

Recently I’ve been working on parallelizing some HTML5 canvas image processing code with web workers and hit a few stumbling blocks, mostly due to some unexpected limits and misunderstandings about workers. Below are some notes I’ve jotted down while working.

All my work was in Firefox, so the points above may not necessarily be true for other browsers.